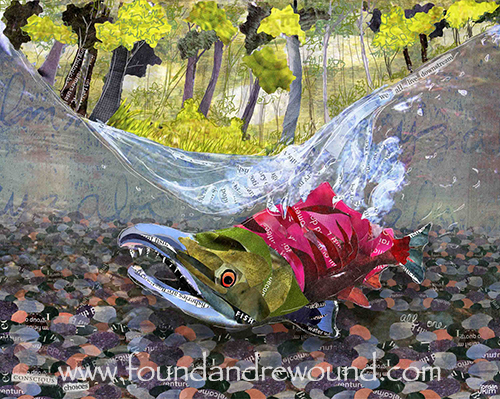 Here in the Pacific Northwest, salmon are THE fish.  Historically the region provided an exceptionally rich, nurturing environment for salmon. For the Native Americans, salmon played a critical role in both their culture. With the arrival of early pioneers and entrepreneurs in the 19th century, a dramatic change took place.  Early settlers viewed the salmon as an inexhaustible resource.  But by the turn of the 20th century, it was becoming clear that salmon runs were being depleted.  Rapid deterioration of fish habitat became evident in the early pollution of the rivers and spawning streams.  Today, “saving the salmon” is the mantra of countless conservation efforts and millions of dollars worth of investments in habitat restoration.  The salmon’s amazing tenacity – both in their natural life cycle and in the plight of their species – is incredibly inspiring.  Words imbedded in this piece include “we all live downstream,” “conscious choices,” and “all one.”

Reproductions of this image are available through my Etsy shop.

All of my cards and prints are printed on high quality, 100% post-consumer recycled, white, matte cardstock with archival ink.

Please don't take or use any images without permission.  Thanks.